"Faced with a choice between a prolonged, painful death at the hands of an enraged Llama and a rapid, glorious death wreathed in laser-fire in G-space, what could you do but represent your race in an awesome battle of skill and dexterity?

Your opponents, fiercer than a Magra-Vampa with a sore nose, colder than a glass of liquid helium, faster than a greased armadillo on a hot tin roof, are the devilish Warfiends of Zzyax. (It seems that someone does not like you!)

Then all but fear drains from your mind as all sensations cease and you blast into the Laser Zone.

Your only hope - SURVIVE!"

One of Jeff Minter's early eighties shoot'em'ups in his typical frantical style, Laser Zone has you controlling not one, but two "zone gunners" in a constrained playfield. Controlled with only one joystick, you move one zone gunner on a vertical wall and one at the bottom. Wave upon wave of nasties come into the zone, and must be shot down before they reach either wall, where neither gun can reach them and they advance toward you. You can try to escape perpetually, since your movements wrap around the screen borders, at least until another enemy has reached your wall, but it is better to use up one of your electro bolts that will erase everything on the screen. 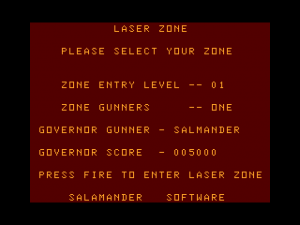 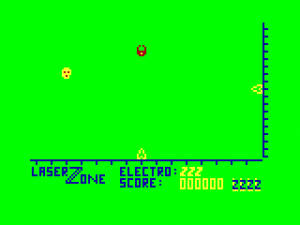 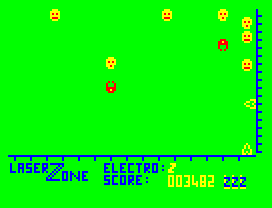 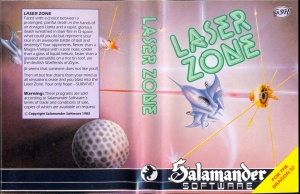 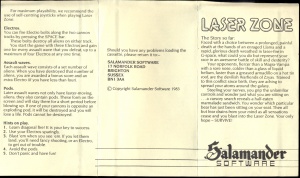 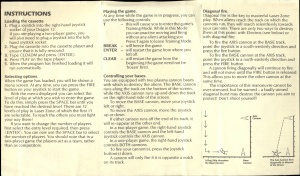 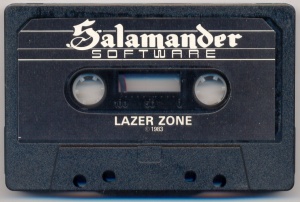