This game was written by a Norwegian, Geir Hovland, who also wrote the music, 'For he's a jolly good fellow', no less, and this has proved to be a very difficult game to play. Originally described to me as a Pacman-type game, the screen dump on the advertising sheet makes it look like that. As soon as you start playing it, however, you will realise how different it is. Played with a joystick - a switched type is best although control is still very difficult to begin with - you start at the top of the screen and move a pipeline through a maze of tunnels to collect as much oil as possible by passing over dots, and collecting barrels which give you even more points, 25 for an oil spot and 200 for a barrel. As you move a solid line is left behind you, representing the pipeline and you must take care that none of the marauding oil-monsters, which move in both directions along some of the horizontal passageways, touch any part of this line. If they do the message 'Oops. We gotcha' appears, which makes me think this writer liked Megabug. To withdraw the pipeline all you need to do is press the fire-button and it retraces its steps almost immediately. The oil in the upper part of the screen is very easy to reach but it becomes increasingly harder the lower down the screen you need to travel to as you have to still watch out for the monsters at the top as well as those at the bottom. If one is moving along one of the passageways you are told that there will not be another immediately behind it but you still have to be careful in case one comes in from the other end. Only four lives are given to you and you virtually have to surrender at least one of these to clear the very bottom of the screen. It took me many hours of play before I was able to complete the first screen and I was then faced with the message 'Well done. Now continue with a harder level'. After this it took many sessions at this game before I could get any further but I have now been able to get as far as the fourth screen, and although they are all different they do not appear to get greatly harder. This game is addictive, however, and no doubt I will spend many more hours trying to get even further and try many different tactics to beat those monsters. Luckily there is no time limit so you can hide away by your little oil rig for as long as you like, though this tends to annoy the rest of the family who are queueing up to have a go. You get an extra life for every 10,000 points but I have only achieved this on a couple of occasions and, as yet, I have not been able to manufacture extra lives or move on to the other screens by dubious means. All in all a well put together game, although the graphics are not outstanding, especially the monsters, but at that price it is well worth it. I especially liked the yoyo type symbols to show you how many lives remain. 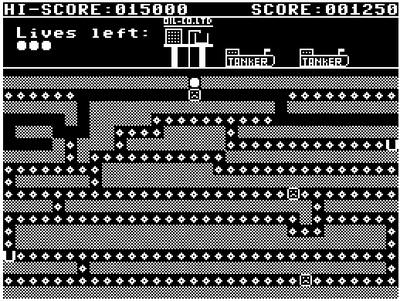 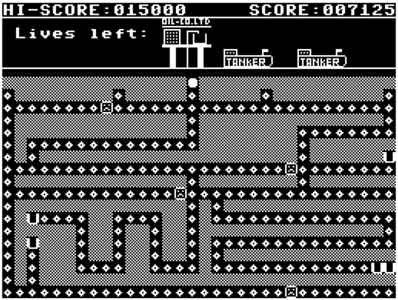 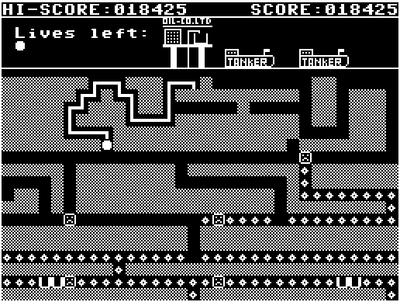