Hunchback was published by Ocean Software in 1984 for the Dragon 32, and it was a port from the original arcade version which was developed by Century Electronics in 1983. The game was also available on most of the other 8 bit micros available at the time. Each level of the game takes place on a Castle Wall and the player must control the hunchback across the screen from left to right whilst avoiding various obstacles in order to ring the bell at the far right of the screen. Successfully ringing the bell brings the player to the next level. Obstacles include fire pits which must be swung over on a long rope; castle ramparts which must be jumped across (some of which contain knights jutting spears at the Hunchback); flying fireballs and arrows. In addition, another knight attempts to climb up the castle wall to reach the hunchback. Eventually, after completing a number of levels, the player must rescue Esmeralda. If this final screen is completed, the game resets, sending the Hunchback back to the beginning to restart the game, but at a faster speed.

What's wrapped in clingfilm and swings from the bells of Paris? It pains me to tell you that the answer is "The lunchpack of Notre Dame". If you have the kindness to forgive me that apology for a joke, and have had your eyes open in arcades recently, you will have noticed that for some reason, the exploits of a crippled Frenchman two centuries ago have proved fascinating to many people, Charles Laughton starred in a cult movie many years ago, and the story found its way to the arcades about a year back. Hunchback is a popular game in which you take on the role of the unfortunate bell-keeper as he swings his way far above the roof-tops of Paris attempting to rescue his doomed love, Esmeralda. This game is brought to you by two firms this month. Ocean Software with Hunchback and Cable Software with Quazimodo. After spending several fruitless hours with each, the conclusion I've come to is that both are worthy of consideration as a reasonable version of a difficult arcade game. They both have their good points, as well as their more irritating features, and I can't honestly say that one is better than the other. I found Hunchback closer to the arcade game and with rather more detail in the graphics, but Quazimodo is easier to play in the early stages I would have thought a voice moaning "The bells! The bells!" would have provided a good soundtrack, but Hunchback has musical touches - something like the Teddy Bears' Picnic has to be borne bravely each time you play, and a sort of soft, squelching sound emanates from the TV speaker as the hunchback lurches across the screen. For what it's worth, this title caused me more frustration as I failed to climb over the towers of Notre Dame for the umpteenth time, but the frantic movements as I struggled to avoid the arrows in Quazimodo totally destroyed my favourite Spectravision joystick, which wasn't up to the pounding involved in the game. The object in both programs is to overcome apparently insurmountable objects such as battlements and moats to reach Esmeralda and take her to safety. On the way, you may encounter such problems as floating islands, flaming arrows, and so on, each involving its own special means of escape. If you have extreme patience either of these games is likely to give you a lot of fun as well as a pile of broken joysticks. 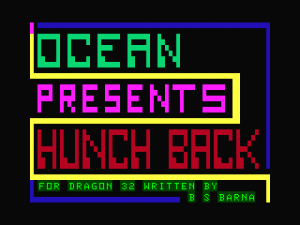 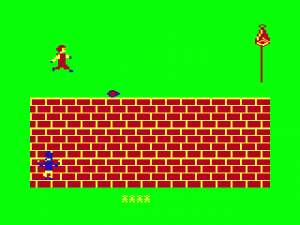 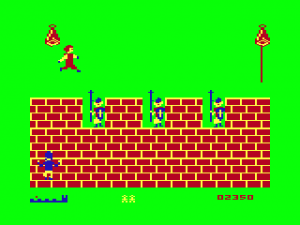 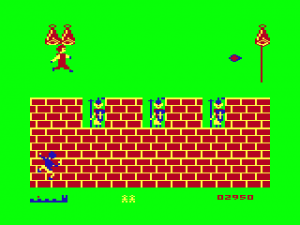 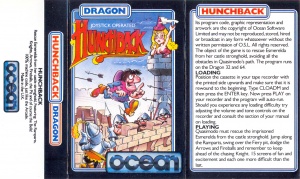 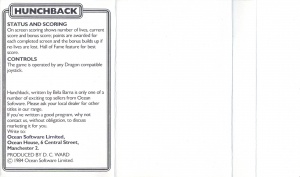 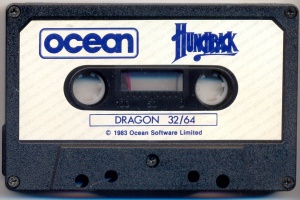