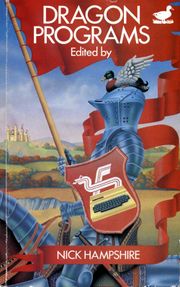 First published in 1984 by Duckworth

A collection of type in BASIC programs written principally by Mr John Alishaw. The extent of Mr Alishaw’s contribution, and who the other contributors are is not stated.

From the Rear Cover:

This book provides a collection of 20 exciting and interesting programs for the Dragon computer. There is a fascinating version of Star Trek as well as other arcade favourites such as Breakout, Rhino and Landmine. Games of logic like Gomoko, Supermind and Planet Ruler are also included, while Mindreader simulates artificial intelligence. Other programs demonstrate the best features of the Dragon: Piano - 3D Graph - Sound Effects - Kaleidoscope - Graph Plotting - Egg Timer - Birds Demo. A must for all Dragon users.