Using an MP3 player is a long-established way of playing cassette images into a Dragon, providing a quick and easy way to transfer content from a PC and avoiding the inconvenience associated with using a real cassette player.

To play data from an Apple device requires no special cables or adapter, however, the circuit presented here takes that a step further and allows you to record data (e.g. saving BASIC programs) from the Dragon on to your iPhone or iPad.

Whilst the intention had been to release an app for iPhones and iPads to handle automatic conversion between .cas files and a .wav files, this has not yet happened. Playing .wavs from any app with music player support (e.g. Dropbox) and recording your data with the built-in Voice Memos app, works just fine.

The iPhone/iPad/iPod Touch devices use a four contact 3.5mm jack socket which supplies the expected stereo audio out (headphones) and a microphone input in one socket. For iOS to detect that a microphone is connected, there must be a certain level of resistance (impedance) on the line.

This simple circuit provides that impedance and also attenuates the audio output from the Dragon a little, so as to avoid forcing the iOS device to record at its maximum levels.

All you need to make this cable is some three core shielded cable, two resistors, a five pin DIN plug (male), and a 4-pole 3.5mm jack (male). The resistors can easily be soldered in place on the wires and will then fit within the body casing of most metal-bodied DIN plugs. 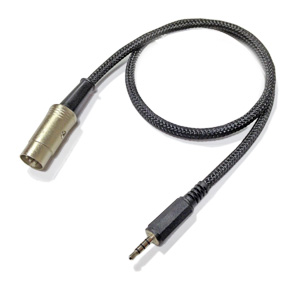