Published by Adventure International, this text-based adventure game was the first in the series of many from Scott Adams.

Gameplay involved moving from location to location picking up any objects found there and using them somewhere else, to unlock puzzles. Adventureland was the most generic fantasy adventure and the first in a series of 12 adventures from Adams. The Commands took the form of verb and noun, such as "Climb Tree". The commands could be truncated to three letters such as "Lig Lam" for "Light Lamp". Later Adventures required four.

Movement in the game was limited to North, South, East, West, Up and Down.

To complete the game the adventurer had to collect 13 lost artifacts: a statue of Paul Bunyan's Ox, Babe; jeweled fruit; golden fish; dragon eggs; a golden net; a magic carpet; a diamond necklace; a diamond bracelet; a pot of rubies; royal honey; a crown; a magic mirror; and a firestone. 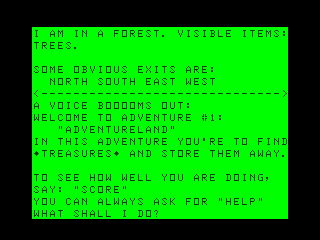