by FranzLucien
What is this Driver good for?

by tormod
The DriveWire adapter connects your Dragon to the USB port of a modern PC. On the PC you can run a program (DriveWire4 server) which acts as a virtual floppy or harddrive for the Dragon. The Dragon needs to run a disk operating system (like HDB-DOS), or NitrOS-9, or some other client program, which supports DriveWire.

by KenH
The Drivewire deluxe made it to the armchairarcade blog!


Dragon: This “Dragon DriveWire” is a nicely cased Tano Dragon/Dragon 32/64 version of the popular Tandy/Radio Shack Color Computer DriveWire that lets you use your modern computer as a file server to the classic computer, among other features. 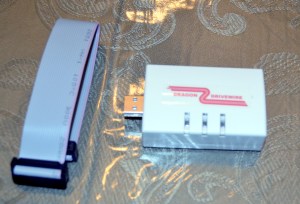 Thanks for reporting. Here's a link to the article: http://armchairarcade.com/perspectives/ ... 6-vectrex/
All times are UTC+01:00
Page 2 of 2
Powered by phpBB® Forum Software © phpBB Limited
https://www.phpbb.com/