Fast Edit v1.00 was written by Geir Hovland in the period March-August 1990. After the review in Dragon Update by Raymond Roach in December 1990, version v1.01 was released. As of September 2011, FEdit is released to the public domain by the author.

When I think that I have found the best text editor/word processor for the Dragon, up comes someone with another which offers much that the others do not. Geir Hovland has done just that with his FEDIT V.100 disc. I have reviewed it using my Dragon 64 with Superdos E6 and a Panasonic KX-P1081 printer. The screen presentation is 64 x 32 upper and lower case characters. This, using a TV set for the screen, is a little difficult to read at my age, but is really very good, the program is fully menu driven and very straightforward to use. The left/right arrow keys bring the required menus on screen. Only one hiccup came to light in the edit mode. After making a deletion, the cursor did not flash until the left arrow as pressed a second time. Once this was known, no other problems were found. Block move, copy or delete functions are easy to use as are the word search/replace facilities. A menu allows you to control key repeat rate and delay time, and, if you like that sort of thing, have a keyclick. There is also a menu which allows you to upload and download text between computers at one of four Baud rates. The print menu provides for full or part print with or without linefeed. It also caters for serial and parallel printer connection. Now I come to the part which I found sets this program apart from others. You can use the full IBM international character set within the text by pressing the CLEAR key followed by the ASCII number. These 255 possibilities have really expanded the Dragon in a way I have never found before. Geir Hovland deserves every encouragement Dragon owners can give him - so PLEASE buy a copy of the disc, which brings a first rate English manual with it, and open up the Dragon for even greater use. P.S. Having just printed a proof copy of this review I realised that I have forgotten another word of information. When you have finished your text, ALWAYS end with an ENTER. If you do not, the last line will not print out - as I have just reminded myself. The disc can be obtained from G.E. Hovland, Stubbsvingen 67B, 7036 Trondheim, Norway. Because of the high charges involved in international cheques, please pay in Norwegian Kroner. The cost for disc and manual is only 100 Kronber. (Ask your bank how you can pay).

Comment by the author: In the updated version V1.01, an extra return/linefeed is sent to the printer after the last page. The cursor flash issue pointed out has also been fixed. 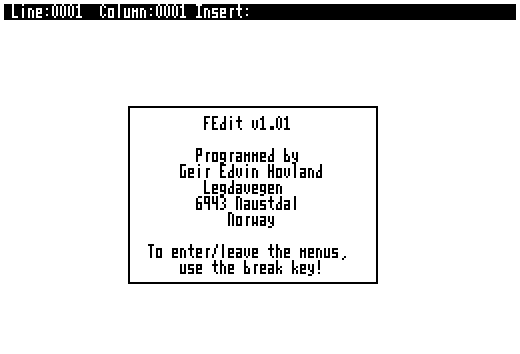